Inside The Extras Dept.

Announcing the 2022 winner of The Andrew Dunbar Award! 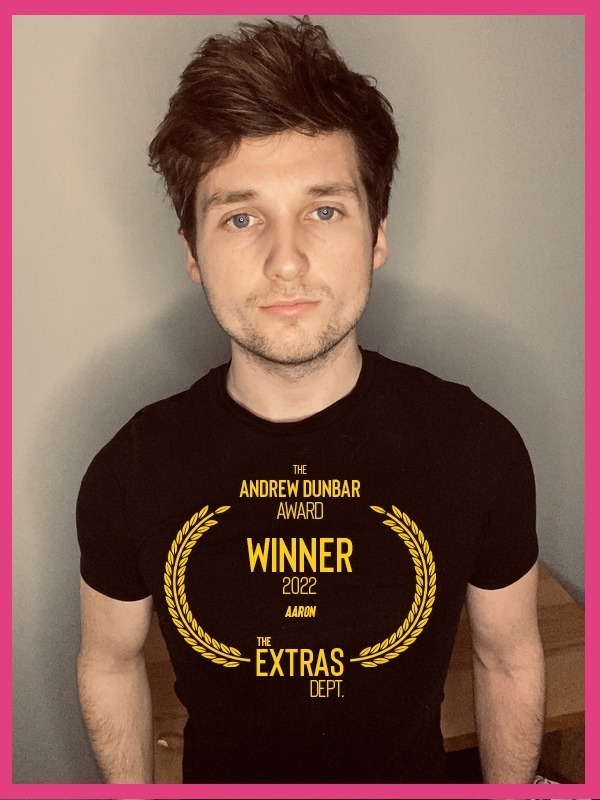 Every year we like to celebrate our most worked extra in honour of Andrew Dunbar, a legendary extra who held the title for many years.

This year, we are overjoyed to award the 2022 Andrew Dunbar Award to Aaron.  Aaron was booked for some lengthy continuity roles on two productions last year, totalling a whopping 80 days filming on set.  That's 22% of an entire year!  Not to mention costume fittings and covid tests.

As part of The Andrew Dunbar Award, each year The Extras Dept. make a charitable donation.  After a conversation with Aaron, he has decided to follow in the footsteps of previous winners and has asked for the donation to be made to PIPS.  PIPS Suicide Prevention Ireland Charity provides counselling and befriending support to individuals who are experiencing or have experienced suicidal thoughts or mental unwellness. PIPS Charity also provides support to families and friends who have been touched by suicide.

We encourage you to read more about PIPS and the great work they do and if you can to make a donation via the link below:

Congratulations Aaron, your hard work in 2022 was recognised both on set and by all our team here at The Extras Dept. You were always quick to respond to our requests, your were concise and we could tell that you read all your information thoroughly.  You were reliable and had great availability.  These really are the cornerstones of being a great extra.

Now spending some time in sunny Florida, Aaron has been kind enough to answer some questions about his experience as an extra in 2022.  A must read for those interested in delving into the world of extras work. Here's what Aaron had to say looking back at 2022:

TED: You were booked for a lot of continuity filming days across two productions last year. Do you have a most memorable extras' moment from that time?

AARON: Yes! It was a busy year for me that’s for sure. Working on a long production is always an absolute pleasure. I can't believe I got the opportunity to do two!

The most notable extras' moment from Wreck has to be the riot scene. We spent all day doing it and it was so much fun to be part of the chaos! The wake scene was also pretty notable, we all assumed Ali would be singing a sad ballad but they filmed it for the first time and didn’t tell any of us that it was going to be “The Thong Song.” To be fair to everyone we held it together until cut... but then everyone lost it!

With Nova all the music video dance scenes are the most memorable, from learning the choreography to filming from all different angles, it could have been 8am and we were shooting these scenes for hours. It was exhausting and hot in the wigs and costumes but it was definitely a great way to start off the day….oh and the liquorice all sorts scene 😣

TED: What were the differences between the two productions you worked on last year?

AARON: Both productions I worked on last year were incredible; they both stood out in different ways! Wreck was a dream production to work on as the comedy/slasher genre is my all time favourite but going back to Nova Jones for a second series was so much fun. I loved working on it because it’s fun and goofy and the songs are banging if I’m being honest. But it was great to see the cast and crew again and this time it was so much more special since covid restrictions were so strict in season one, this time round I got to know everyone more and it felt like one big family. It was also exciting to be noted as an additional character and getting a cast credit!

TED: How did you find the costume, hair and make up routine on Nova Jones?

AARON: The costume was surprisingly comfortable! Although hot, as the summer time approached, seeing as they were boiler-suits!

Believe it or not, hair and makeup was my favourite part of the day. We never knew what scenes we’d be filming the day prior and the makeup team were the first people we’d really speak to in the morning. I really loved getting to know them and chatting in the makeup trailer every morning, it was a lot of fun! I will say though that the wig and I had problems throughout production and we are no longer on speaking terms.

TED: Any big learning curves in your time as an extra last year?

AARON: I’d say I’m a lot more vocal when it comes to being on set. Being an extra sometimes you feel like you’re there to be seen (even if it’s just the background) and not heard. But everyone is so lovely and we are all there working on the same production and all just want the show to be great. I’ve learnt not to be so shy and in return I think it made my time on set so much more enjoyable! It also doesn’t hurt to make friends in the industry, just being an extra has opened doors for me already with production roles from knowing the right people!

TED: Any advice for people booked for long continuity roles such as yourself?

AARON: Talk to everyone! The amount of times I’ve been on the same set as people that I’ve worked on previous productions with is crazy. It’s always nice to see a friendly face and on long productions you’re going to want to have friends.

Also get some rest when you get home, those early starts add up!

TED: What are your interests outside of extras' work?

AARON: I am currently working at Walt Disney World in Florida as a cultural representative in the United Kingdom pavilion in Epcot, which I was meant to do all the way back in 2020! But we all know what happened then. So in a funny turn of events not going until now is actually the reason why I was so available to work at the Extras Dept for so long! I also graduated from LJMU with a degree in Drama and am passionate about pursuing a career in the entertainment industry, so I am thankful for extras for opening that door for me and seeing what it is like to work on a production at such a large scale. I’m also a digital artist on the side providing digital portraits which I run via Instagram! @asccustomdesigns

TED: Tell us about what you’re up to in America!

AARON: The cultural representative programme is a 12 month programme that hires a select few from their respected counties to come and work in the pavilions that are built up to look like said country. There are 11 in total and they make up the world showcase in Epcot. My job is to represent the United Kingdom and teach the guests our culture and customs and most importantly that the United Kingdom isn’t just “England”. It’s definitely weird being away from home for so long and so far away as well but it’s a great opportunity to be here and the weather isn’t too shabby either!

How does it all work??

A little guide into our processes and how we think and a few common misconceptions addressed.